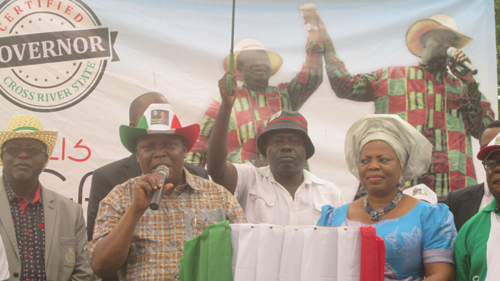 A former Commissioner for Finance, Budget and Planning in Cross Rivers State, Mr. Fidelis Ugbo, has alleged that Governor Liyel Imoke encouraged him to resign his appointment as secretary to the National Planning Commission to contest the 2015 governorship election on the platform of the Peoples Democratic Party but later dumped him.

He, however, promised to correct many wrongs if elected governor under the platform of the Labour Party.

Speaking with journalists in Abuja on Monday, Ugbo, who was a secretary to the state government, said he informed the governor of his plan to resign from the NPC before submitting his resignation letter, adding that he (Imoke) supported the move.

He said, “I asked him this question, before I left National Planning Commission: ‘I came to you and told you that the party is giving out guidelines and deadlines for registration. This is my resignation letter that I want to submit to resign my appointment from the NPC. Should I go ahead to resign?’

“The Governor said, ‘yes go ahead’. Then I said fine because, I cannot submit my letter of resignation to the President and the Vice President without your talking to them. At least, courtesy demands that before they see my resignation letter, because I am working directly under them, I feel you must have had a discussion with them.

“He said well, I shouldn’t worry that I should go ahead and submit it, which I did. And then, every other thing that I did from that very day till this moment, there is nothing I did which I did not confer with him”.

The LP flag bearer stated that what played out, including the intrigues and the games “were not satisfactory”.

He said, “To me, that was not democracy. If we want to teach our children democracy that is not the way we should teach them. If you begin to hear the story of how it all went, it will not sound good in the ears of anybody; it will not enrich our political culture and our political processes, it will not mean democracy”.

Ugbo also claimed that on the day of the PDP governorship primary in the state, Gov. Imoke called him at about 2:35am in the morning telling him not to participate in the exercise.

In a swift response, the Special Assistant/Chief Press Secretary to the governor, Mr. Christian Ita, described Ugbo’s claim as laughable, saying he should concentrate on selling his manifestoes instead of blaming somebody else for his woes.

“Imoke is a democrat and there is no way he could have told anybody who has any ambition to contest election that he should not run. Wouldn’t that have been anti-democratic? Fidelis Ugbo’s claim is laughable. In any contest, there is always a winner and they have been meeting with the PDP governorship candidate. Concessions were made to Fidelis Ugbo. Did he also tell you that it was Imoke that gave him that job? He should rather concentrate on selling his manifestoes instead of blaming somebody else for his woes”, Ita fired back.