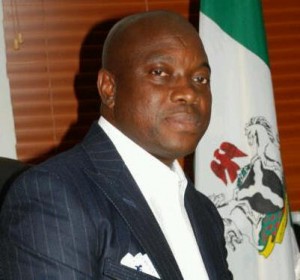 Senior Special Adviser to President Goodluck Jonathan on Niger/Delta Affairs and Chairman Amnesty Programme, Kingsley Kuku has said Jonathan will win 21 out of the 36 states of Nigeria in the March 28 presidential election.

Kuku said this at the weekend, during a stakeholders’ meeting with aggrieved members of the Peoples Democratic Party (PDP) of the northern senatorial district of Ondo State, at Owo in Owo Local Government Area of the state.

He noted that the opposition All Progressives Congress (APC) had no structure in Ondo State, adding that it would be difficult for APC to have the required 25 percent in the state.

“With the coming together of the Labour Party and PDP, APC is doomed in this state and that is the reason you must not exclude Ondo state from the victory train,” he said.

He therefore called on the members of the PDP in Ondo State to sheathe their swords and concentrate on winning the state for President Jonathan and the party. He urged them not to give room for the opposition to cash in on the crisis.

Speaking earlier, a chieftain of the party in the state, Chief Olusola Oke acknowledged that the impact of the reconciliation meeting had started yielding results across the states. He said that the would win in all the election.

“The mission is to sensitise our people and preach unity and to complement other efforts to maximise vote in this state for Mr President and all other candidates.

“The nose-diving trend of the fortune of the party in the state has been completely reversed. We can confidently say that the old member of PDP that were disenchanted have become active, interestingly become assured and willing to put in their best to ensure victory of our party and I must say that it has been a rewarding exercise,” Oke said.