Home Metro News I Am Sure Of Buhari’s Integrity, But I Can’t Say The Same...
Facebook
Twitter
WhatsApp 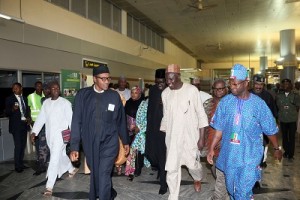 The General Overseer of Latter Rain Assembly, Pastor Tunde Bakare says the presidential candidate of the All Progressives Congress (APC), Muhammadu Buhari has great leadership qualities and integrity. However, he doubts the political formation where the former head of state has found himself.

Bakare, who was Buhari’s running mate for the 2011 Presidential election said this after delivering a lecture at a Lent and Easter event, organised by the Lagos Island Club in Lagos.

“Buhari is a man of integrity and I have no doubt about what he can do and achieve, but his environment, I doubt,” said Bakare, who echoed the concerns of several Nigerians who have questioned the integrity of Buhari’s political associates in the APC.

Pastor Bakare, who is also the convener of the Save Nigeria Group (SNG), questioned the source of wealth of some of the politicians in Buhari’s camp. “How can those who want to bring change be with so many excess baggage?”

He said he does not belong to any political party, but disclosed that he had been offering advice and counsel to both leading parties, when necessary.

Bakare accepted to become Buhari’s running mate ahead of the 2011 elections under the umbrella of the Congress for Progressive Change (CPC). CPC lost the presidential election to PDP. The demise of the party soon followed as the party allied with other opposition parties to form the All Progressives Congress. Bakare had since stayed out of active politics.