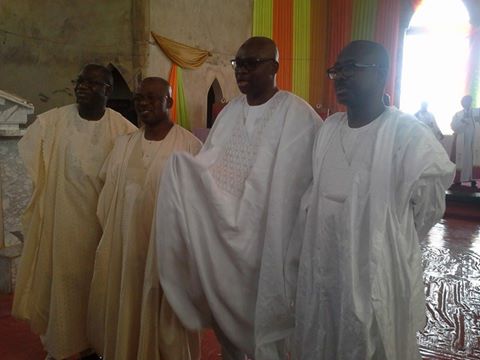 Former civilian Governors of Ekiti State on Friday reacted to the alleged reign of terror being unleashed on members of the All Progressives Congress as well as members of the ruling Peoples Democratic Party in the state opposed to the political philosophy of incumbent Governor Ayodele Fayose.

The ex-governors said it had come to their notice that a team of hoodlums in three unmarked Hilux vehicles went round the State, armed with guns, machetes and other dangerous weapons to the houses of Mr. Fayose’s perceived opponents, leaving them ‘severely bloodied’ in the process.

In a press statement jointly signed by the former governors – Niyi Adebayo, Segun Oni and Kayode Fayemi – they alleged that the hoodlums, in their most recent operation in Ijero Local Government, created mayhem, beat and tortured the 90-year old father of the Commissioner for Finance under the Fayemi administration. They also alleged that the hoodlums destroyed shops and properties including cars belonging even to PDP members because of their perceived opposition to Fayose.

According to the statement, the attack came barely 48 hours after the former governors visited the State Commissioner of Police as well as the State Director of DSS on the security situation in Ekiti.

The statement noted that Messrs Adebayo, Oni and Fayemi had called on the security chiefs to prevail on Governor Fayose to put an end to the ongoing impunity, thuggery, brigandage, political rascality and torture.

“We had warned that if push comes to shove, the Party and all well-meaning people in the State will result to self-help to protect themselves, their assets and their rights guaranteed under the Constitution of the Federal Republic of Nigeria”, the statement said.

The statement recalled other acts of violence against the APC in the state, warning that these unwarranted attacks would no longer be tolerated.

“During the visit of the Vice Presidential candidate of the All Progressives Congress (APC) to Ekiti on Monday March 23rd, 2015, members of APC riding to the reception venue in Buhari/Osinbajo and APC branded vehicles were attacked in Ado Ekiti. They were shot at and several of their vehicles, including those belonging to Hon. Mrs. Bunmi Oriniowo, APC House of Assembly candidate and Amb. Olofin, the APC Ekiti Central Senatorial candidate, were destroyed by the hoodlums.

“We want to state unequivocally that we will no longer tolerate any further unprovoked attack on and willful destruction of APC branded vehicles and assets in the State.

“Keeping calm thus far is not out of weakness or incapacity to respond. We are only mindful of the lessons of history.

“Please recall that the First Republic ended with the ‘Operation Wetie’ political violence that erupted in Ekiti when similar situation of political rascality as we have now became prevalent in the West. We do not want this to happen again.

“Notwithstanding, if further provoked, we will have no choice than to respond in kind!

“We can no longer continue to live with a situation in which seven lawmakers are making laws for the State in gross violation of our Constitution. It is alarming that this can be allowed to continue without anyone attempting to call the abnormality to order.

“Ekiti belongs to all of us and we will not allow any group of hoodlums to willfully bastardize our values and heritage.

“We remain committed to handing over to our children ‘a banner without stain’. We hope the security forces will actively carry out their constitutional mandate and save this democracy from collapse”, the ex-governors said.