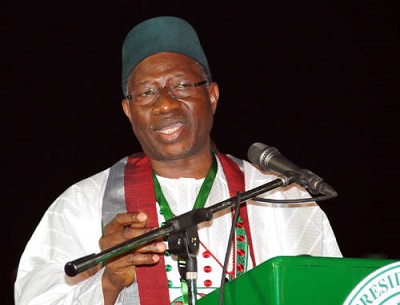 President Goodluck Jonathan has expressed confidence that he will win a second term despite the soaring popularity of his main challenger, Muhammadu Buhari.

With the presidential elections scheduled to take place next weekend, Mr. Jonathan told the BBC in an interview that he has nothing to worry about, as his ruling Peoples Democratic Party, PDP, remains the strongest party in Nigeria despite the seeming nationwide support for the opposition All Progressives Congress.

“I will surely win it… My party is still the strongest party”, the president said.

The interview was published Friday, a day after the national chairman of PDP, Adamu Mu’azu, admitted that his party will win the elections but not with a landslide as believed in some quarters.

Mr. Mu’azu said: “While I do not see a landslide victory coming, I am convinced that our party will perform creditably in the Southwest and the North of Nigeria and elsewhere in all the elections this year because the evidence is clear that despite our travails at the beginning, we have done very well over the past fifteen years of our nascent democracy since 1999 to record victory. Those who disbelieve our resilience will be surprised for victory is ours”.

In an interview with the BBC that touched on a wide-range of subjects, Mr. Jonathan repeated his comments that he believed the abducted Chibok school girls are alive since the jihadist sect, Boko Haram, has not shown they had been killed.

“We have not seen dead girls that is the good news. I believe they are still alive, I believe we will get them”, he said.

The president said the Nigerian military will hopefully recover the remaining territories under Boko Haram control in less than a month.

The president said the group has grown weaker with the government’s renewed drive that has seen the military reclaim several towns and villages held by the terror group.

“I’m very hopeful that it will not take us more than a month to recover the old territories that hitherto have been in [Boko Haram’s] hands”, Mr. Jonathan said.

“We never expected that [Boko Haram] will build up that kind of capacity. We under-rated their external influence. Since after the civil war we’ve not fought any war, we don’t manufacture weapons, so we had to look for help to re-equip our army and the air force”.

On violence during his presidency, Mr. Jonathan said he took responsibility for “whatever goes wrong”.

“Whatever goes right, I take the glory”, he said. “Whenever I hear that somebody dies in Nigeria… I feel pain, because they are all Nigerians”.