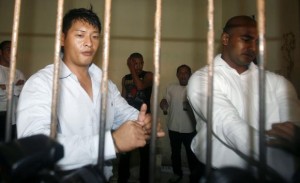 Indonesia on Thursday rejected an Australian proposal for a prisoner swap made in an 11th hour effort aimed at  saving the lives of two Australian drug smugglers expected to face a firing squad within days. Reuters report:

The planned executions of Myuran Sukumaran, 33, and Andrew Chan, 31, have ramped up diplomatic tension between Australia and Indonesia after repeated pleas for mercy on their behalf. They are among a group of up to 11 convicts, mostly foreigners, due to be executed on the prison island of Nusakambangan.

Indonesia’s foreign ministry said there was no legal basis for Indonesia to act on the proposal that had been made by Australian Foreign Minister, Julie Bishop.

“Basically Indonesia does not have any regulation or legal framework regarding a prisoner swap,” said Indonesian foreign ministry spokesman Armanatha Nasir. “This idea was put forward to our minister two days ago and we told them then.”

A spokeswoman for Australia’s Bishop said: “We have not had confirmation of that from our end yet.” Also facing execution are citizens of France, Brazil, the Philippines, Ghana and Nigeria, as well as Indonesia.