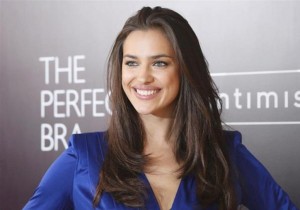 As beautiful as she might look, you can imagine her feeling ugly standing close to the best footballer and also the richest in the world.

Irina opened up to Spanish society magazine Hola in an interview.

“My ideal man is faithful, honest and a gentleman who knows how to treat women. I don’t believe in men who make us feel unhappy, because they’re boys not men. I thought I had once found the ideal man but it didn’t turn out that way. I think a woman feels ugly when she’s got the wrong man at her side. I’ve felt ugly and insecure.

“Relationships are hard so you have to know what type of man you want by your side and what their values are, what is important in his life.If you stay with someone it’s because you’re walking in the same direction and you’re both looking for the same thing.Both should share the same concept of what a relationship means and the same energy to believe in a monogamous relationship.”