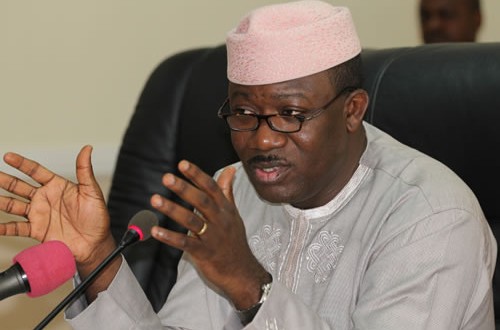 The immediate past Governor of Ekiti State, Dr Kayode Fayemi, has said the All Progressives Congress has strong evidence against President Goodluck Jonathan over his alleged plot to foist an Interim Government on Nigeria.

Fayemi’s assertion came on the heels of an allegation by the national leader of APC, Asiwaju Bola Ahmed Tinubu that he was offered the position of Vice President in an interim government being planned by Jonathan.

The APC leader also claimed that following his rejection of the offer, which he said was aimed at breaking the ranks of the opposition, the Peoples Democratic Party-led federal government was planning to assassinate him.

Fayemi, who said spoke in Aramoko Ekiti on Saturday during the 40-day Fidau for the late Pa Jejelola Akingbolu and Mrs Raliat Akingbolu, also lambasted his successor, Governor Ayodele Fayose, for allegedly lying against the APC Presidential Candidate, Gen. Muhamadu Buhari (retd.), over his health status.

“We have heard somebody whose own definition of politics is about lying, saying Gen Buhari was taken to a hospital in London. Buhari never went to hospital throughout the 10 days he was in London because I was with him throughout.

“Fayose even used his mother as an example of how people who are old used to behave just because he wanted to drive home a point that Gen Buhari was sick. This is like disgracing his own mother in the public and it is against the value Ekiti is known for”.

The ex-governor said President Jonathan could not deny that he invited Tinubu to be part of the planned Interim Government, saying the APC leader made the allegation in good faith and not to spite the president or heat up the polity.

“President Jonathan is becoming desperate by the day and he would stop at nothing to return to government. You know what they did in Ekiti. So, there was nothing Tinubu said that was not verifiable.

“I have evidence that he was invited to be part of Interim Government as a way of dividing us as a prominent member of our party. There is absolutely nothing they cannot do to distract us because they could see that Presidency is gradually slipping off their hands.

“It was good that these alarms were being raised and put in the front burner that there was a sinister intention to subvert the will of the people.

“What Nigerians are looking for now is for the elections to be held on March 28 as scheduled by INEC and for the victor who was overwhelmingly elected by the popular votes to be announced.

“We as party leaders and members of opposition are ready to congratulate the winner, but if they go ahead and subvert the will of the people, they will surely go to jail”, he declared.

Fayemi assured that Buhari will keep to his promise not to dig into the financial corruption perpetrated in the past under Jonathan if that was what members of the ruling party were afraid of.

“Major General Muhammadu Buhari (retd.) said he won’t look into the past. He said he will draw the line on the very day he took over and I don’t know why President Jonathan, who has the paraphernalia of office is afraid of election.

The ex-governor declared that the government of Jonathan would be held responsible, if anything untoward should happen to Tinubu.

“If Jonathan loses this election, he can still get whatever he wants. It is a matter of negotiation with Buhari, who had promised not to probe the past governments.

“But I want to say that we will hold Jonathan’s government responsible, if even the minutest thing happens to Tinubu”, he concluded.