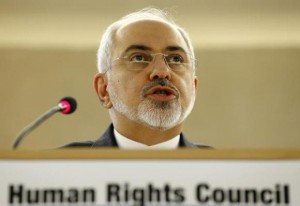 Iran rejected and termed “unacceptable” U.S. President Barack Obama’s demand that it freeze sensitive nuclear activities for at least 10 years on Tuesday, but said it would continue talks aimed at securing a deal, Iran’s semi-official Fars news agency reported. Reuters was there:

“Iran will not accept excessive and illogical demands,” Iranian Foreign Minister Mohammad Javad Zarif was quoted as saying by Fars. “Obama’s stance … is expressed in unacceptable and threatening phrases … ,” he reportedly said, adding that negotiations underway in Switzerland would nonetheless carry on.

Zarif and U.S. Secretary of State John Kerry sat down for a second day of meetings hours after Obama had told Reuters that Iran must commit to a verifiable halt of at least 10 years on sensitive nuclear work for a landmark atomic deal to be reached.

The aim of the negotiations is to persuade Iran to restrain its nuclear program in exchange for relief from sanctions that have crippled the oil exporter’s economy.

The United States and some of its allies, notably Israel, suspect Iran of using its civil nuclear program as a cover to develop a nuclear weapons capability. Iran denies this, saying it is for peaceful purposes such as generating electricity.

Kerry and Zarif met in the Swiss lakeside town of Montreux as Israeli Prime Minister Benjamin Netanyahu prepared to criticize the diplomacy in a speech to Congress in Washington.