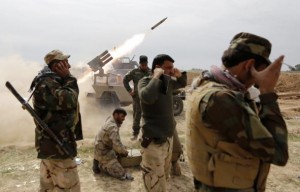 Iraqi troops and militias successfully drove Islamic State fighters out of the town of al-Alam on Tuesday, the local mayor told Reuters, clearing the way for an offensive to retake the city of Tikrit from the radical militants.

“I am speaking now from al-Alam and I announce officially that the town is under the total control of security forces, the Hashid Shaabi (Popular Mobilization) units and local tribal fighters,” Laith al-Jubouri said by telephone.

“We rejoice in this victory and we want al-Alam to be the launchpad for the liberation of Tikrit and Mosul,” he said.

Tikrit, the home city of executed former president Saddam Hussein, is the focus of an offensive by the army and Shi’ite militias known as Hashid Shaabi, backed by local Sunni forces. An attack on Mosul is expected later this year.