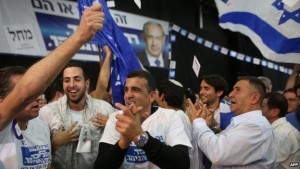 Exit polls had forecast a dead heat but with almost all votes counted, results give Likud a clear lead over its main rival, the centre-left Zionist Union. The outcome gives Mr Netanyahu a strong chance of forming a right-wing coalition government.

It puts the incumbent on course to clinch a fourth term and become Israel’s longest-serving prime minster. The latest tally gives Likud 30 seats in the 120-seat parliament, the Knesset, with Zionist Union on 24 seats. In a speech to jubilant supporters in Tel Aviv after Tuesday’s polls closed, Mr Netanyahu described the vote as a “great victory” for Likud, which had trailed the Zionist Union in opinion polls in the run-up to the election.

Mr Netanyahu “plans to immediately begin forming a government in order to complete the task within two to three weeks,” a statement from Likud said. It said he had already spoken to parties he saw as possible coalition partners, including right-wing and ultra-Orthodox parties and centrist Kulanu, which won 10 seats.