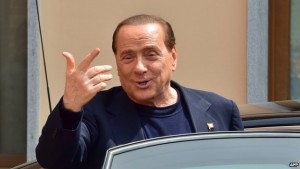 The Court of Cassation rejected appeals to overturn his acquittal on charges of underage sex with a prostitute and abusing his office to cover it up. Berlusconi, 78, hailed the ruling as a beautiful day for politics, justice and the rule of law. “I am back in the field with Forza Italia,” he said.

The three-time Italian prime minister remains embroiled in several legal battles and is barred from running for election under the Severino law, which bars from office anyone sentenced to more than two years in jail. But his supporters aim to overturn the 2012 legislation. A master of political comebacks, Silvio Berlusconi believes he is ready to pull off yet another return to the Italian political scene.

For the past few months, he was quietly serving his community service sentence weekly and under court surveillance – but now that is over. And the most embarrassing of the legal cases against him, which saw him accused of paying for sex with an underage prostitute, has been thrown out, for good. He is ready and willing, he says, to help his Forza Italia party overcome internal dissent and clarify, once and for all, an ambiguous relationship with Prime Minister Matteo Renzi.