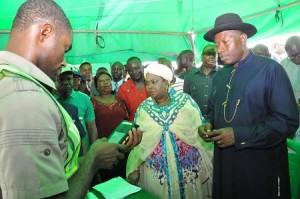 The national leadership of the People’s Democratic Party (PDP), yesterday, described the inability of the Smart Card Readers (SCRs) to accredit President Goodluck Jonathan, Governors Jonah Jang of Plateau, James Ngilari of Adamawa and Isa Yuguda of Bauchi, among others, during the presidential and National Assembly polls, as a huge national embarrassment.

It has therefore called on the Professor Attahiru Jega-led Independent National Electoral Commission (INEC), to give Nigerians an explanation.

According to the PDP National Publicity Secretary, Chief Olisa Metuh, in a statement, the failure of the SCRs during the elections across the country would have been avoided if INEC had listened to “sound advice from well-meaning individuals and organizations including the PDP regarding their deployment without proper testing”.

“The unfortunate development is a vindication of our earlier position that as good as the idea of card readers is, it was too virgin to be successfully used in a general election without proper testing especially in an environment as ours that is not entirely digitally proficient.”

The PDP has also called for the prosecution of INEC officials involved in the accreditation of under-aged persons in some states especially in the northern part of the country.