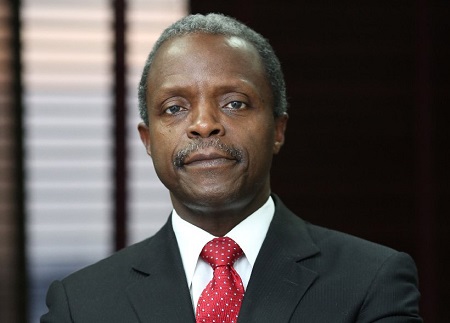 The All progressives Congress (APC) vice presidential candidate, Prof Yemi Osinbajo (SAN), has said President Goodluck Jonathan is tired and overwhelmed by governance, so he must be voted out on Saturday for Nigeria to regain political and economic freedom.

According to Osinbajo, the Peoples Democratic Party-led government has grounded the economy of the country through pervasive corruption and other socio-economic problems in the last 16 years.

Speaking at a town hall meeting with members of APC in Ado Ekiti, the Ekiti State capital on Monday, Osinbajo said a vote for Major General Muhammadu Buhari (retd), was a vote for deliverance from the shackles of “poverty, unemployment and corruption” in Nigeria.

He said, “President Jonathan is tired of governance because he is overwhelmed. His government has no focus. As of today, Nigeria is the most corrupt in the world.

“That is why they are afraid of Buhari’s presidency because they are afraid of being jailed. They know there won’t be room for corrupt practices. We are promising you that wonders shall happen again in this country if Buhari wins this election.

“President Jonathan has failed Nigerians in all aspects and deserves to be rejected by Nigerians. If you look at our programme, all we emphasized is how to provide jobs for our unemployed youths. Whether Jonathan likes it or not, the dream of Nigeria becoming a liberated State shall come to pass on Saturday”, he said.

The APC vice presidential candidate also urged voters to ignore the ‘vote and go home’ order of the Inspector General of Police, Suleiman Abba, saying they should instead vote and stay back to protect their votes.

The APC Deputy Chairman, South and former Governor of Ekiti State, Segun Oni, who branded the Jonathan administration as a disgrace to the country, said Nigeria could ill-afford another four years of corruption and bad governance under the PDP.

The immediate past Governor of Ekiti State, Dr. Kayode Fayemi, urged the people of the state to use the forthcoming polls to be part of history as one of those who fought for Nigeria’s rebirth.

He added that those that were afraid of being jailed should not be allowed to perpetuate themselves in office and continue to loot the country.