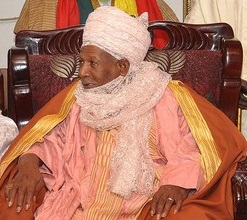 Speaker of the House of Representatives, Rt. Hon. Aminu Waziri Tambuwal, has commiserated with the government and people of Zamfara state on the death of the Emir of Gusau, Alhaji Mohammed Kabir Dan Baba.

Tambuwal described the late Dan Baba as a traditional ruler of note who ruled with the fear of God.

According to a statement by his media adviser, Mallam Imam Imam, the Speaker said the death of the Emir at this period in the history of the nation was a great loss.