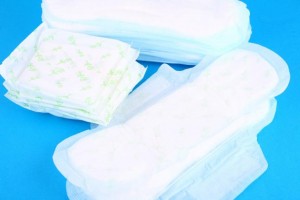 Customs agents at an airport in the Lebanese capital has seized more than half a ton of maxi pads after radioactive material was detected in the shipment. UPI covered the incidence:

The Lebanese Finance Ministry said the 30 crates of feminine hygiene products, weighing a total 1,221 pounds, were seized Friday at Rafik Hariri International Airport in Beirut after electronic scanners detected radioactivity in the shipment.

Finance Minister Ali Hassan Khalil ordered a sample from the shipment to be sent to the Lebanese Atomic Energy Commission for testing.

The shipment arrived at the airport Friday from Dubai, officials said.

The discovery came amid a crackdown on radioactive goods being shipped into Lebanon. Officials said customs agents at the same airport detected radioactivity in a shipment of cellphone covers imported from China in February.