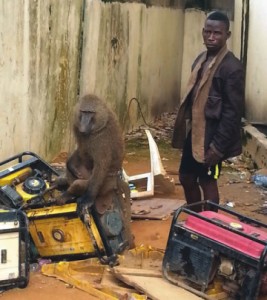 The police in Lagos State have arrested a 27-year-old robbery suspect, Mohammed Nafiu, who is said to have specialised in using Baboons and snakes to dispossess people of their money and valuables. Punch has more:

One of the Baboons was also arrested and is presently in police custody. Nafiu told the police that apart from the conventional tool (gun) used by most robbers, the sight of a snake or monkey unsettles and scares people. He said he was able to dispossess his victims of their valuables when confronted with these animals, especially fully grown ones.

The Kano State-born Nafiu, and his accomplice, Nura, who is still at large, said they initiated this method of robbery operation some years ago. “We trained the animals to obey our instructions. On a single command, the animals attack whoever we want to rob and we are able to take whatever valuable they have on them, especially money,” Nafiu said. Nafiu, who is married with three children, was a farmer and native drug vendor until he came to Lagos about 10 years ago. “I learnt there were many Hausa people in Lagos, so I decided to come with my monkey which I had been using for monkey shows in Kano,” he said.

A police source said on the day Nafiu was arrested, he and his accomplice had two monkeys in their Nissan Primera and were trailing a man who had just come out of a popular bank in Ogba area of the state. The man was said to be holding a nylon bag containing money.