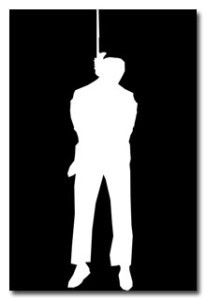 A deep fear of the unknown which has descended due to the spate of mysterious suicides currently ravaging Ibusa community, near Asaba, Delta State on Thursday night, was taken to a new level when a middle aged man identified as Sylvester (surname withheld) allegedly committed suicide after he had a serious quarrel with his wife. Leadership Newspaper reports:

It was reliably gathered that the man, a father of three children, allegedly took his own life after the quarrel he had with his wife during night fall of the fateful day. Sources say he, the wife and children slept in different apartments after the quarrel, but the following morning the wife stumbled on him lying lifeless in his room before raising the alarm that attracted neighbours to the scene.

But the police public Relation in the state, DSP Celestina Kalu, who confirmed the incident, said that the woman was arrested by the neigbours who suspected her complicity in the death of the husband. DSP Kalu explained that the man was found dead on the bare floor in his room, foaming from his mouth, adding that the suspect, currently helping the police will be charged to court on completion of investigation of the autopsy.

Investigation revealed that some residents who may have been manipulated in the deaths of some persons in the community, have fled to neighbouring communities. While the police authorities also confirmed that the corpse of the man had been removed, relations of the deceased who spoke to our correspondent on condition of anonymity described him as easy going man and wondered why he could commit suicide in such a manner right in his house.