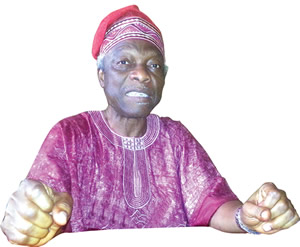 The Afenifere Renewal Group, ARG, has warned against the manipulation of the forthcoming general elections to protect the unity of the country just as it said the polls would determine the continued existence of the country as an entity.

The breakaway faction of Afenifere, the conventional pan-Yoruba socio-political group, stated that what the country needed most was true federalism and restructuring.

The National Chairman of ARG, Mr. Wale Oshun, who stated this in an interview at the weekend, said since President Goodluck Jonathan had yet to implement the report of the 2014 National Conference before the elections, it had become necessary that the polls be credible.

He said Nigeria was presently on the socio-economic and political precipice.

He said, “If the elections of 2015 are held and they are free and fair, it will provide the opportunity to start the rebuilding process once again. Once it is free and fair, whoever emerges would have the mandate, I mean the support of the people and the courage to confront the issues facing the country.

“But if the elections are not free and fair, I don’t see how whoever is allowed or enabled to emerge can hold the country together for another four years. I don’t see it happening”.

The ARG leader noted that failure of the next president of the country, after a credible election, to restructure the system would spell doom for the country.

He said, “One thing that is certain is that his regime must restructure. If he does not restructure, Nigeria is on the precipice. Everybody, including the government in power now, realises this. Otherwise, we will not be having all these aberrations.

“People might immediately say that it is economic but what of corruption. Corruption is made possible by the absolute power and (high) level of immunity at the centre. That is why we have less resource to develop the country. It is bound to be that everybody is making the demand.

“It is certainly not in the interest of any part of the country to think that all others will be contented with remaining second-class. It is not possible anymore”.