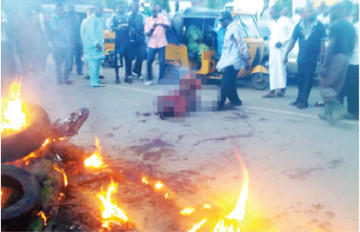 A suspected female suicide bomber, who was targeting the ever-busy Muda Lawal market in Bauchi State metropolis, has been set ablaze by an irate mob.

The mob were said to have carried out jungle justice on the lady after she refused to subject herself to a routine stop and search at the entrance of the market, fuelling suspicion that she was a member of Boko Haram, whose insurgency including use of suicide female bombers has resulted in the death of about 20,000 people including in Bauchi.

It was learnt that lady was carrying a bag, which upon opening it by the mob, contained two Improvised Explosive Device and two empty bottles tied to her back.

When confirming the incident to PREMIUM TIMES, the Bauchi police spokesperson, Haruna Mohammed, said the incident occurred at about 7:00 a.m. at the market entrance.

The spokesperson said police patrol teams including an explosive ordinance disposal unit rushed to the scene, dispersed the crowd and has since restored normalcy to the area.

The victim, yet to be identified, was already burnt to death when the police arrived the scene, Mohammed, a Deputy Superintendent of Police, added.

The Bauchi police spokesman said the case was being investigated and the perpetrators would be brought to book. He also warned members of the public to desist from taking laws into their hands as anyone arrested would face the full wrath of the Law.

A witness, Dauda Galambi, said he saw the protesters put tyres on the victim, and set her blaze while throwing stones at her, with some chanting “kill her, don’t allow her to go; kill her before security protect her”.

“Actually, I arrived late so I don’t know what happened. I only witnessed tyres on the lady and rains of stones”, the witness said. “But I was told she refused to be screened by the security officials at the market entrance”.