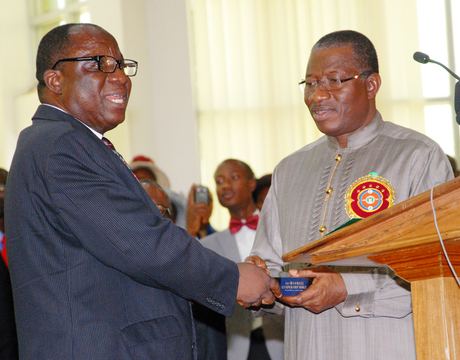 Muslim and Christian leaders, operating under the aegis of Inter-Faith Prayer Forum, are to hold a joint prayer for President Goodluck Jonathan and Vice President Namadi Sambo in Abuja on March 20.

Leaders of the prayer forum, Archbishop Leonard Kawas and Sheik Dan Zanga, stated this when they paid a courtesy call on the Director-General of the Peoples Democratic Party Presidential Campaign Organisation, Senator Ahmadu Ali in Abuja on Thursday.

Speaking on behalf of the Forum, Kawas said they were in support of the Jonathan administration and applauded the PDP-led administration for doing “great works”.

The cleric pointed out that no one could ascend the Presidency if he did not have the blessing of God, explaining that this had informed the decision of the religious leaders to pray ceaselessly for the present administration.

“Koran and the Bible agree on the fact that only God Almighty gives power”, he said.

Kawas also allayed the fears that the forthcoming elections would be violent, declaring that “those in support of mischief will be exposed by God”.

Ali, who was represented by his deputy, Prof. Tunde Adeniran, conveyed the appreciation of the campaign organisation to the religious leaders, for their prayers and support since the beginning of the electioneering.

Adeniran also commended the forum for their sacrifices and “the clear vision that informed the setting up of the Inter-Faith Prayer Forum, which has united the adherents of the two major religions in the country”, adding that “You did not wait for us but used your resources to mobilise your members”.