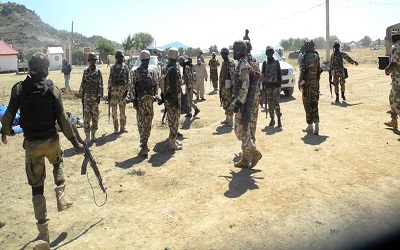 Another major victory was recorded by Nigerian troops on Thursday as they succeeded in flushing terrorists out of Madagali, the last major town held by Boko Haram in Adamawa State, Northeast Nigeria.

The Director of Defence Information, Major General Chris Olukolade, who is on a tour of mission areas in the North-East with some select journalists, announced the development via a press statement.

According to the Defence spokesperson, there were no casualties on the side of the Nigerian forces, which included the Army, Air force and other security agencies.

He said mop-up operation is ongoing in the town.

The ridding of Adamawa of terrorists is an extension of the string of successes the Nigerian troops have had since they stepped up the anti-terrorism war on February 14.

Other locations also cleared in the course of the operation, according to the military, include Shikah, Fikayel, Tetebah, Buza, Kamla and Bumsa.