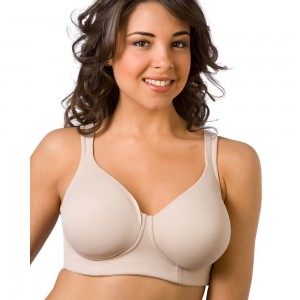 A woman’s bra is literally the closest thing to her heart, which is why it’s so upsetting when the cherished undergarment betrays her.

Every female has had that depressing moment when she’s forced to bid farewell to her beloved support system because it’s reached its life expectancy. It’s a sad, sad day because we know it must be replaced and that means we’re shelling out $40-$60 we don’t have.

Whether we have the money or not, we must replace the bra because it just isn’t socially acceptable to roll into work without one — trust us on this one.

So what are the ways our bras have turned against us?

1. The day the underwire comes out from down under
Every woman has experienced that awful moment when her underwire creeps out of its cushy home and stabs her in the chest. You never thought something this close to your heart could hurt so much, but I guess this is a lesson to take through life.

3. When it looks amazing, but is simultaneously compressing your lungs
There’s a saying, “Beauty is pain, but worth it.” I’m guessing it was a man who came up with this line. Sure, your boobs may look amazing, but that definitely doesn’t mean they feel amazing.

4. When your padding falls out
The whole point of padding is that it’s supposed to be “subtle”; unfortunately, it doesn’t always stay in its proper place. When this happens, there’s no denying it — just suck it up, embrace it and laugh.

5. When you ignore the washing instructions and it comes out deformed
Hand washing wasn’t a suggestion, it was a rule… oops.

6. When your straps are tangled, never to be straightened again
I’m not sure which is worse: a deformed bra or this awful situation. It’s never a good look to have tangled bra straps, but as every female knows, sometimes this is just what you’re left working with.

7. The internal debate of whether you should wash it or not

Are bras ever really “dirty”? Don’t the same rules that apply to jeans apply for bras? If you pretend your bra is clean, then it is. Well, that is unless you spill ketchup on it…

8. When it’s so tight, it divides your boobs in two
Guys might go by the mantra, “The more boobs the better,” but any girl who’s had her boobs separated into quarters knows this is far from a good look. Trust us, on one girl, four isn’t always better than two.

9. When you’re 16, go to Victoria’s Secret and buy a triple-padded bra only to have your spot blown up at a pool party
I guess you should’ve bought a padded swimsuit while you were at it. Unfortunately, that lesson was learned the hard way.

10. When it gives you boobs on your back
Maybe you should’ve bought a bigger size, but it’s too late now. Your back skin and muscles have been morphed into mini boobs your bra is now also supporting.

11. When you have to switch from the middle clasp to the end clasp
It’s better than having boobs on your back, now isn’t it?

13. When it’s completely visible through your work shirt
Your coworkers should just be grateful you decided to wear a bra at all.

14. When that one metal clasps flips over and your bra is officially a goner
It happens to pant clasps, it happens to bra clasps — and we all what it means: They are going in the trash.

15. When your shoulders have permanent bra indentations
This looks oh-so-sexy when you’re changing from a regular shirt to strapless top. You might as well have just kept the bra on if this was going to be the situation you would end up facing.

16. When your nips don’t fit in it
Awk-ward… try not to bend over for anyone’s sake.

17. When it gets unclasped in the middle of your day
This may be the bonding moment you and your coworker needed! There’s nothing like the female empathy that becomes apparent when your bra gets unhooked.

18. When a bra costs you more than your sit-down dinner
Why are bras so f*cking expensive? Probably because companies realize how desperately we all need them and, instead of sympathizing, they take advantage of us!

19. When you go and get measured and figure out you’ve been wearing the wrong size this entire time

This is complete and utter BS. You’ve been living your life the same way for years now only to become aware that it was completely wrong! How are you expected to trust anyone these days?

20. The fact that your most supportive bra is also your ugliest
I don’t even know why this is surprising. I mean, why would anything make sense when it comes to boobs and bras?

21. The sizes are never uniform across brands

So you’re telling me I’m a 32D in Calvin Klein, a 34B in Victoria’s Secret and a 36C in whatever this Target brand is? Makes sense…

22. When your bra size doesn’t translate to your bathing suit size

You could be rocking DD’s, but that doesn’t mean you’re an extra large in a bathing suit top. Why swimsuits aren’t sized by bust size and instead small-medium-large is actually mind-blowing.