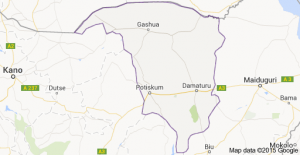 President Goodluck Jonathan has said that the Federal Government will ensure that no town or village will be taken by terrorist group, Boko Haram, ever again, in Nigeria.

The president stated this at the PDP presidential campaign rally in Damaturu, the Yobe state capital. He assured of the government’s commitment to ending insurgency in the country.

“As I speak, I am so happy to announce that Yobe has been freed of Boko Haram as all territories earlier under the control of the sect members have been recaptured by our able troops and we will henceforth resist any attempt by the sect members or any group to take control of any of our territory again.

“It is unfortunate that our brothers and sisters have turned mad against us and have left us with these sad memories,” said Jonathan.

He stressed that the era when Boko Haram members were wasting innocent lives was over. He expressed his administration’s commitment to improving the lives of the people despite the activities of the insurgents.

The president said he set up a federal university in the state to bring university education closer to the people. He, however, urged the youths to make the best use of it.