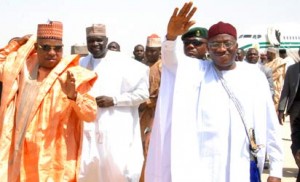 Political leaders from the North are ready to support President Goodluck Jonathan, but under one condition; he will support their preferred candidate to become president in 2019.

The elders led by elder statesman, Alhaji Tanko Yakassai, had visited the Presidential Villa, Abuja last week for further talks on a pact to support Jonathan for re-election.

The group was said to have met with Vice President Namadi Sambo. Sources confirmed to Vanguard that the key message conveyed through the Vice President to Jonathan was the need for assurances that power would revert to the North in 2019.

Although Jonathan had agreed to their terms, the elders reportedly came specifically last week to get words from the Villa that the North-west would be backed for the Presidency in 2019.

It was learnt that the northern elders had wanted to secure the assurances so as to be in the best position to define their messages to strategic elders and leaders of the North.

“The deal right now is to see how the North would reciprocate years of South-south backing with support for Jonathan, while the President will in turn back a northern candidate to succeed him in 2019. With that pact sealed, we have a concrete message for the North,” a source who knows about the situation told Vanguard.