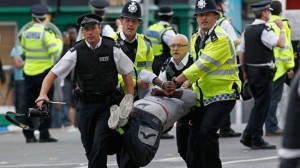 A 32-year-old man in Norway has confessed to raping his own two-month old son and also distributing the film to an online paedophile network, at the start of what the prosecutor has called one of the most “serious abuse cases in Norwegian legal history”. The Local News has more:

“My client has chosen to confess to all charges and lay all his cards on the table,” the man’s lawyer told the court at the start of the trial on Monday, according to Norway’s Aftenposten newspaper.
Police began tracking the group last year after they found the harrowing video of the rape among files seized from the computer of a suspected paedophile.  “We knew nothing about this child, but on the video we could hear the sound of voices from Norwegian radio or television in the background,”  District Attorney Kristin Røhne said in the prosecution statement.
Police traced the video to the 34-year-old who had already been convicted in 2009 of sexually assaulting a minor, and also of distributing videos of child abuse and assault.  The 32-year-old is in court alongside the 34-year-old man to whom he sent the video, a 27-year-old man, and two women, one 27, the other 43.
All are being charged with involvement in a paedophile ring whose members filmed their own children in sexual positions or acts.  “The abuse case is being characterised as one of the most serious in Norwegian legal history, because the people involved had had a sexual interest in very young children,” Røhne said.