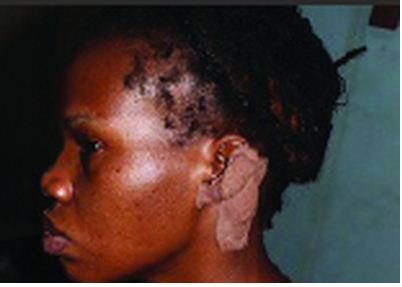 The Special Anti-Robbery Squad (SARS) of the Lagos State Police Command is currently investigating a case of how a man simply identified as Tunde, the security guard of Nurse Ukamaka Onyeka,( pictured above) invited armed robbers to attack her home in the Ago area of Lagos state.

“On the fateful day, my husband traveled out of Lagos, leaving me, my children, house-help and our security guard.  I went to work and returned late at night. When I drove into our compound, I did not expect that armed robbers were at our security post.  We have a dog but it did not bark. Immediately, I alighted from my car and entered my room, two men armed with knife and cutlass pounced on me and warned that I must co-operate with them as two others armed with guns were keeping watch at our gate. They pushed me down, tied my hands and legs with rope.
They also forced clothes inside my mouth.  After covering my mouth with clothes, they now ordered me to show them where I kept money in the house. One of them placed a knife on my throat, threatening to slash it if I failed to co-operate. When I saw that they meant business, I now showed  them where I kept a N100,000 which they collected.  The money was for my school fees. After collecting the money, I thought they would go. They also collected laptops, jewellery, wristwatch and mobile phones. They commanded me to take them to my husband’s room. In the room, out of fear, I still pointed to them the wardrobe where my husband kept money, they opened it and collected the money in his box. The hoodlums, after collecting the money, still stabbed me on the neck.  They locked me in the room in the pool of my own blood.  I  bled for about 20 minutes. Why I strongly suspect my guard was that while the robbery was going on, the hoodlums were calling his names.  He was also busy patrolling from one room to the other without the robbers hurting him or even cautioning him.  At a point, he came inside the room where I was tied and told the armed men not to kill me. After the attack, my guard left in company with the robbers, but later resurfaced.  I now accused him of inviting the robbers. Moreso, during and after the attack, our dog did not bark and I later discovered that Tunde had locked it inside the cage. As I went to report at the Ago police station, Tunde fled from the premises. When the police came, I discovered that the knife that used on me was my kitchen knife which Tunde collected from me to peel oranges. The rope they used in tying me is also the one he was using to hang his clothes. The pillow case they stuffed in my mouth also belonged to him,” she said.

Tunde is said to have confessed to committing the crime.