Home Metro News Obasanjo Is An Open Book, You Read A Line, You Learn; He...
Facebook
Twitter
WhatsApp 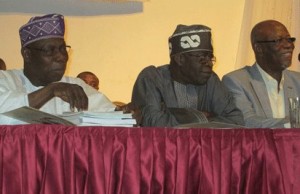 National leader of the All Progressives Congress (APC), Bola Tinubu, yesterday, described former President Olusegun Obasanjo as a ‘nationalist, a teacher, a disciplinarian and a tutor in dignity and boldness’. He said the former leader remained very committed to Nigeria.

Speaking at a lecture which held in Abeokuta as part of Obasanjo’s 87th birthday, Tinubu also disclosed the role played by Obasanjo during the merger of some political parties to form the APC. According to him, the former President accepted the offer given to him to be their navigator.

“When we started this present regime of merger and alliances, and we visited him and we told him we wanted him to be a navigator, he said, ‘navigator? I will, my party, I am still in there, partisanship, I will try to avoid it because of Nigeria, but, if you people put a good team for the sake of this country together, I will give you wisdom.

“And if you look at what has been happening since then, Obasanjo is an open book, you read a line, you pick a paragraph, you learn, you comply, if you drink from that fountain of wisdom, you will see value in it, he is very committed to Nigeria.

“As we were talking few minutes ago, I said Nigeria is the giant of Africa and he said, ‘I hope you will remove the K-Leg’ and I said, ‘the elephantiasis would be killed’, he said by what, and I said by APC.

“And the change that is necessary for now was the day I saw him instructing that shredded umbrella card torn into pieces, and I said what is happening but to an interpreter, he said, ‘you’ll wait if General Obasanjo would say anything at all’, it wasn’t about anything else, it was about the love of our country, patriotism, putting the country first before self.

“There’s nothing Obasanjo would have wanted in terms of material, oil well, oil lifting, whatever from Jonathan that he wouldn’t have gotten or what from PDP that he wouldn’t have gotten as a retention service, he put all of that aside, believe in the unity, cohesion, and progress of this country in order to free himself from that bondage of commitment to one partisan politics that is probably drifting in the middle of the storm of a political change, he rather be afloat and chart a new course,” Tinubu said.

Tinubu and APC have exploited the fall-out between the former president and the incumbent. He has now left the People’s Democratic Party (PDP) and may not join the APC officially just to retain his elder statesman status. Years ago, Tinubu had this to say about him, following the outcome of the Kogi State governorship election, which the former Lagos State governor claimed was rigged.

“What integrity has Obasanjo in terms of his legacies for Nigeria to speak on elections? The only election that was clear in this country was the one that was organised before the Fourth Republic. The worst legacy in electoral practice was left by Obasanjo. He has no reason whatsoever and he has no audacity to talk about free and fair elections in this country.”

“… He should go away and retire in shame politically. He should leave the political landscape of this country alone. He brought a whole salad of corruption, manipulation and failures.” Tinubu and Obasanjo had since become political allies.

The national Chairman of APC, John Odigie-Oyegun and Governor Ibikunle Amosun of Ogun State were also present at the event to celebrate Obasanjo.