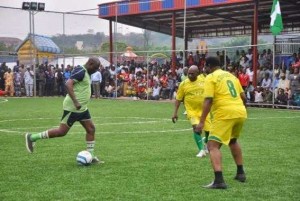 What a way to celebrate your birthday, especially when you are this old.

The controversial former President of Nigeria, Olusegun Obasanjo decided to organize a football match with staff of his Presidential Library and officials of the Ogun State government on Wednesday, March 4, 2015.

Not only did Obasanjo play in the match, they say he even scored two goals for his team.

The game was played as part of celebrations for the former President’s 78th birthday which comes up today.