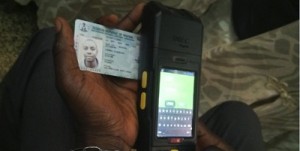 Antagonists of the innovative method of curbing electoral corruption and rigging in Nigeria in the form of INEC Card readers cannot be working for Jesus Christ even if some of them bear Christian names and even preach in their churches. I  have also been informed by some Muslim clerics who reacted to my recently released write up on INEC titled ‘Prof Attahiru Jega, Hero of Nigeria’s Democratic Innovations: Needs International Support Now, and Why Progressives Should Support Him’ that though the Quran did not specifically mention rigging, however, it is against any form of robbery, if it is applied puritanically.
Therefore, all these Pastors, Bishops, Imams, Mallams who have enlisted in the campaign to stop Nigeria’s electoral umpire , Attahiru Jega from using card readers to stop electoral fraud in Nigeria probably because he is an Hausa Man and Muslim, are just agents of Lucifer, Asmodeus, and Leviathan and will soon face the judgments of God.
In the Bible, Jesus Christ was obstructed on his way by a top government official by name Zaccheaus who have stolen lots of money from tax payers and converted such to private use. Jesus went to the house of Zacchaeus and in the course of conversation this man promised to return all that he defrauded, even four times. Our own religious leaders go to the house of thieves and pray for them to continue stealing. I opined in the said write-up that “Jesus forced Zacheaus in Luke 19 vs 8 to return his loot back and the later said to Jesus, “Behold, Lord, half of my possessions I will give to the poor, and if I have defrauded anyone of anything, I will give back four times as much.” Jega led INEC is returning back the people’s mandate stolen through years of successive rigging, especially from the Shagari to the Obasanjo era back to the people.”
Continuing, I said that “He is a hero of democracy; he should be supported and not vilified. INEC must insist on the use the card reader or else let the military postpone the election and go on with their Interim Government option”.
For many years many pastors, bishops, reverends, and priests in Nigeria including myself have prayed and led our congregation and flock  to pray for a better Nigeria where there will be equality, social justice, transparency, peace and tranquility. I have fasted numerous times for this purpose and even undergone various prayer tours with some of my staff around the countryside. .Today God of Abraham had answered us and used a Muslim by name Attahiru Jega. God can even use an atheist or even a chain smoker, I do not care. All I care about is that HE answered our   prayer and this man at INEC decided to employ a technology that will curb electoral malfeasance.
In the same write-up on Jega’s Heroic Innovation I posited that “Jega can be a devout Muslim, I do not give a damn. He could even marry ten wives and divorce six to balance it four, I do not care so much. Jega can make his beard to be longer than that of Osama Bin Laden and he can even do his own Sallat twenty four times daily which is his business, providing he doesn’t disrupt public peace.  Jega has proven to be a better follower of Jesus Christ than Prof Maurice Iwu, a knight of the Catholic Church”
The nation has probably over $ 142 billion dollars of oil revenue stolen in five years, and about the same amount stolen from other sectors because the thieves are not accountable to anybody. If Prof Maurice Iwu had insisted on doing what is right like Prof Jega, Nigeria would not have elected Yar’adua in the first instance. Probably Buhari , Atiku,Odili or Duke  would have won the election and handed over to another by now. All these criminal governors who stole the people’s mandate would not have been elected. All these stealing of public funds by irresponsible leaders who are accountable to nobody would have been curbed since 2007. Prof Iwu, though acclaiming to be a Christian, betrayed Jesus Christ by superintending over the worst electoral robbery in Nigeria not minding that some Catholic Bishops attended his thanksgiving Mass after the election. Iwu lost a golden opportunity to stand by Jesus Christ, Prince of Righteousness, and institute electoral fairness. God, in disappointment, threw him out there and brought in another man from the other faith to do the same work.  The Jesus Christ that I know cannot clap hands for riggers of elections, even if they are backed by ‘anointed pulpits’ and it is time for Nigeria to move from permissible to the perfect will of God.
With Jega’s Card Readers as means of authenticating voters, the electorates can decide to elect performing public servants like Sullivan Chime, Raji Fashola, Adams Oshiomhole, Onyebuchi Chukwu or the present Minister for Agriculture, Akinwnmi Adesina as president in 2019 even if they join a party called ‘Jonas Savimbi Party of Nigeria’ . This means that the electorate is in charge and no more the criminal political riggers of elections who easily transmutation to political thieves.  They can remove any governor, senator, representative member, local government chairman or counselor that uses their money to fly private jets around at their expense.
God has answered our prayer and we Christians who want our congregation to prosper in a prosperous Nigeria, not fettered by corruption, should not fight the same measures invented through the Finger of God (Exodus 8 vs 19). We pray so much and when He answers, we fight the answers and get back for a second round of prayer. The Bible said that “the labor of the foolish weariest him”( Ecclesiastes 10 vs 19). Our prayer among others should include “ Father, let the use of card readers as means of  stopping electoral criminality in Nigeria be perfected, and let those fighting it be consumed by fire in Jesus Name”.
Obinna Akukwe wrote through [email protected]…..www.facebook.com/pages/obinnaakukwe…[email protected]