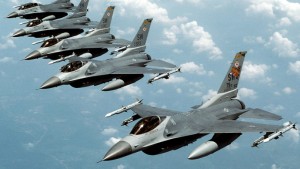 Pakistani air strikes on Wednesday killed at least 34 militants in the country’s lawless northwest, very close to the mountainous border with Afghanistan, security officials said, but residents put the toll at 20. Reuters have more:

Fighter jets pounded positions in the Tirah Valley in the Khyber region, west of the city of Peshawar, in “precise” strikes”, the military said in a statement. “The local population had fled their homes and villages when the operation was launched against the terrorists,” an official told Reuters.

Another security official said those killed belonged to the outlawed militant group Tehrik-e-Taliban Pakistan and an allied group, Lashkar-e-Islam. “In precise aerial strikes in Tirah, Khyber Agency, 34 terrorists were killed today,” the military said in a statement.

The Pakistani Taliban are allied with the Afghan militants of the same name and share a similar jihadist ideology. But they operate as a separate entity, focused on toppling the Pakistani state and establishing strict Islamic rule in the nuclear-armed nation.

In a statement, the Taliban claimed responsibility for the killing in Peshawar on Wednesday of a district president of the ruling Pakistan Muslim League-Nawaz (PML-N), headed by Prime Minister Nawaz Sharif.