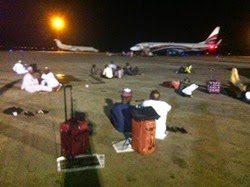 Angry passengers who were to fly to Adamawa and Gombe states from the Nnamdi Azikiwe International Airport, Abuja got so angry and decided to take over the tarmac and sit in protest after their flight was cancelled yesterday night. Some of the passengers said they were at the airport for their 9am flight but the airline kept delaying the flight until 9pm when they informed them that the flight had been cancelled.