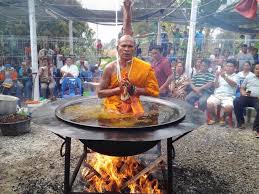 A video of a Thai monk meditating in a pot of hot oil over an open flame has lately being doing the round online, leaving viewers scratching their heads and thinking if it was real or not. Scoop has more:

The video shows the monk, from Thailand’s Nong Bua Lamphu province, seemingly unaffected by the fact that he is up to his chest in what looks like an unbearably hot oil. According to the description of the original YouTube video “a blend of herbs is first applied to the surface of the container to reduce the high heat, but the feat is still seen around his dangerousness. By performing such a test, Buddhist monks prove their strength and determination to the people.” The use of special herbs doesn’t make this seem anything less than a miracle, but some scientists aren’t convinced.

Science instructor, Jessada Denduangboripant, of Chulalongkorn University, says there is no proof that the oil is really boiling. “The only way to prove it is to measure the temperature of the oil he’s sitting in,” she wrote. “The oil doesn’t look like it’s boiling, and the pan just looks strange. The pan might have two layers to insulate the heat.” He claims there are several ways to create this kind of illusion, as he himself demonstrated in a 2012 presentation video where he appears to be safely touching boiling oil. The trick, he says, is to pour in some water in the bowl before adding the oil. The water will then absorb all the heat, but the oil will never boil.