An interesting drama played out in Lagos recently, after some criminals who were with two baboons waylaid a man as he was coming out from the bank at Ogba area of the state. The unsuspecting victim who withdrew the sum of N230,000 from the bank was shocked when he stepped out only to see some roughly dressed young men with two giant-sized baboons starring at him menacingly. Without blinking an eyelid, the man took to his heels, abandoning his bag of money. 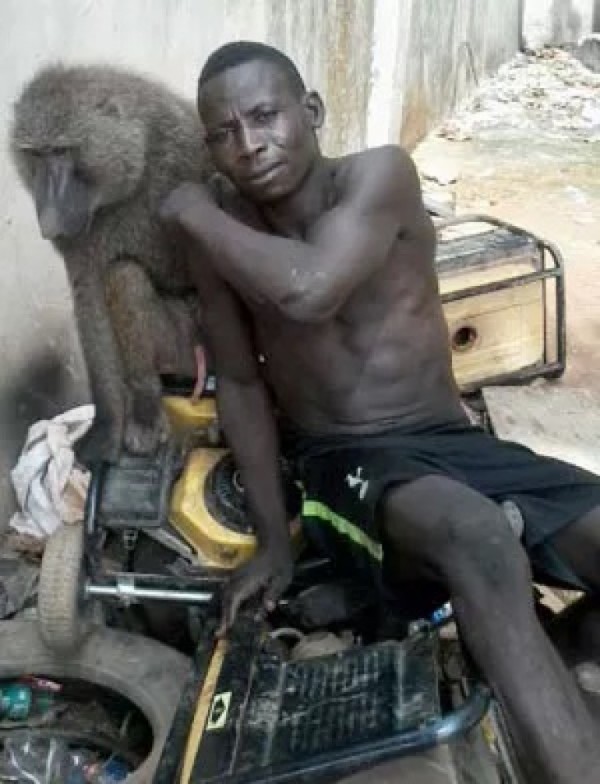 Crime Guard gathered that the bandits used their baboons to scare the victim after driving close to the banking premises with an unregistered Nissan Primera. It was learnt that two of the suspects alighted from the vehicle with two baboons and ambushed the man as he was coming out of the banking hall after withdrawing the money from his account. The victim reportedly was frightened and dropped the nylon bag containing the cash on the ground and ran for his dear life.

While running, the victim discovered that the suspects who took the nylon containing his cash was also running with the baboon towards the opposite direction and he went after him. On realising that the victim was coming after him, the suspect took some of the money from the bag and threw it at the victim who immediately bent down to pick the naira notes which littered the floor, a move the suspect capitalised on to escape into a waiting vehicle with his baboon.

It was learnt that as soon as the suspect and his baboon got into the waiting vehicle, the driver zoomed off abandoning the baboon and his colleague identified as Mohamed Nafiu and at the crime scene. An angry mob that was attracted to the scene nearly lynched both Mohammed and the baboon but the fierce -looking baboon stood stoutly in defence of his master and succeeded in warding off intending attacks, till policemen who were earlier invited arrived the scene and apprehended the suspect.

“I am from Gdala Local Government Area in Kano state. I am married with two children. I am afarmer but later, I began to sell herbal medicines for Malaria, typhoid, hypertension and body pains. After a while, I decided to relocate to Lagos to enable me have more patronage. But before I came to Lagos, I bought a baby baboon as a pet that was a year and eighteen months and started training him.

I came to Lagos almost ten years ago with the baboon and used it for entertainment and for showmanship while selling myherbal medicine. It was during that period that I met Nura, the leader of the gang, who also has a baboon. He was the person that brought the idea of using the baboon to frighten and rob victims. After the first operation, I quit selling my herbal medicine because it was not as lucrative as robbing. I have participated in over ten robbery operations using baboon within Lagos.’’
MODE OF OPERATION

“We use the two baboons each time we want to rob victims. Nura and I would alight from the vehicle with the baboons while a hired driver will be on the alert to drive off. We purposely hire different vehicles for the operation so that we would not be traced.
We pay the driver in advance before each operation and also pay him after each operation. Usually, we operate in areas where we assume victims will be in possession of cash and where it will be easy to escape after the operation, like: banks and shopping malls.

The baboons have been trained to scare victims and snatch their valuables and they do whatsoever we tell them to do.

We pay each hired driver based on the time contracted because of the risk involved, once the time is up, he zooms off with or without us. Also before the operation, we agree on the amount, we give thedriver advance payment for fuel then pay up after the job.

I met Nura in Lagos several years back and my fortunes changed as I was constantly having cash with me. Immediately I saw the police officers, I surrendered myself to them and also assisted the officers in hand- cuffing the baboon.
Crime Guard learnt that the case was still under investigation and efforts are currently in top gear to arrest those who are on the run.