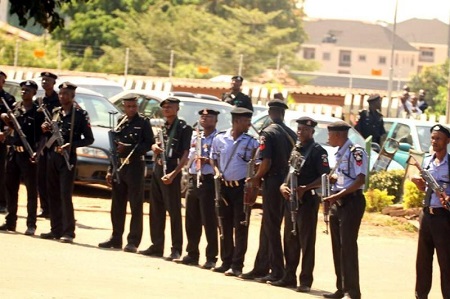 The Ekiti State Police Command has banned street procession to forestall a breach of the peace and unwarranted loss of innocent lives as witnessed during the June 21, 2014 governorship election in the state.

In a statement in Ado Ekiti by the state Police Public Relations Officer, Alberto Adeyemi, the Command said the measure became necessary in view of the perceived high level of political intolerance among politicians.

Adeyemi said, “Intelligence at the disposal of the command indicates that some political parties intend to stage street processions in large numbers as part of their campaign strategies.

“Considering the peculiarity of the political situation in Ekiti State, coupled with the level of political intolerance, such street processions if allowed to happen will inevitably cause conflict, chaos and breakdown of law and order with possible disastrous consequences.

“In order to forestall breakdown of law and order, the command once again appeal to all political stakeholders to obtain permit for any campaign, which must be restricted to a particular location in order for the police to ensure adequate protection at such avenues”.