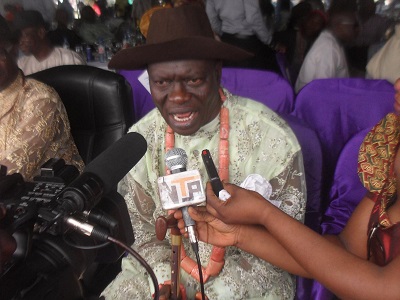 Ahead of this weekend’s presidential and National Assembly elections, the Secretary to Delta State Government, Ovuozorie Macaulay, has denounced the Independent National Electoral Commission’s planned use of the card readers.

In an interaction with reporters in Asaba, the Delta State capital, over the weekend, the SSG warned INEC chairman, Attahiru Jega, against using the card readers, adding that there would be a national calamity if his counsel were ignored.

Mr. Macaulay also challenged the INEC boss to tell Nigerians where the card reader has been successfully used and proven to be reliable.

“My problem with the card readers is that they have never been tested, used and proven successful anywhere. No matter how scientific, no matter how reliable they say it is, it is like an instrument that has never been tested in the theater, and for the first time you want to use it to operate a human heart. It’s not done anywhere in the world. With due respect to Jega, he is a professor and he knows what research is all about.

“This card reader has never been used before in the first time. They are bringing it in. We have had a lot of bye-elections, senatorial, federal constituencies and governorship. If I [were] a governor, I won’t even allow you to use it for my election let alone a national election. As civilized as America [is], as scientific as Israel [is], they have not used this method and it has not been proven in the world before”, Mr. Macaulay said.

He added that it was ill advised to bring such an apparatus to be tested for the first time in a country like Nigeria, stressing that Mr. Jega and his team had made no convincing argument that the intention behind the use of the card reader machines was genuine.

“Until they are able to prove to Nigerians the reliability of the card readers, as far as I am concerned they should put the card readers aside and do the normal elections the way we do it”, said Mr. Macaulay, who added that “After the elections, when you have your bye-elections, go and use it to test so that you don’t cause a national panic”.

The Delta State SSG also dismissed opposition parties contending that they have no structures in place to win any election in Delta State and Nigeria.

According to him, the Peoples Democratic Party (PDP) remained the only party with the structures in the wards, local governments and states, adding that some opposition parties only exist on the pages of newspapers, televisions and radio stations.

“Buhari is not a man that has the pedigree to win elections in Nigeria, and this is not the first time he has contested for the presidential position. President Goodluck Jonathan has an edge over Buhari anytime, any day. President Jonathan has a divine pedigree, which is not hidden. He is the best president Nigerians ever had and will remain the best president the people will still return come March 28, 2015”, the Delta State SSG boasted.