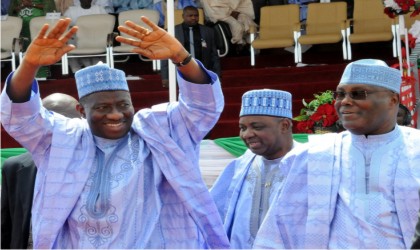 Former Vice President Atiku Abubakar has revealed how President Goodluck Jonathan repeatedly appealed to him to dump the All Progressives Congress, APC, and return to the ruling Peoples Democratic Party.

The former vice president disclosed that President Jonathan pleaded with him thrice – once during a surprise midnight visit to his house – to return to the PDP.

Mr. Abubakar made the revelation in an interview with the Hausa service of the BBC, during which he also explained why he has been visibly absent at the campaign rallies of his party’s presidential candidate, Muhammadu Buhari.

According to Mr. Abubakar, he turned down the personal request of the president to return to the PDP on three separate occasions.

He said the last was in Abuja last Friday when Mr. Jonathan, who is seeking re-election on the platform of PDP, paid him a surprise midnight visit.

He said on that day, he also played host to Speaker Aminu Tambuwal and ex-military president, Ibrahim Babangida, and they held fruitful discussions.

“In the evening I went to bed early, but at around 12 am, I was told the president was in my sitting room, so I came down and after exchanging pleasantries, I asked him to what I deserved such a visit and he said he just came back to still plead with me for support”, Atiku said.

“He said I need to go back to the PDP because we built the party and we are its founding fathers, and that we needed to go back and rebuild it.

“I told him this is the third time you are asking me to return to the PDP and my answer has always been the same; I am not going back”, Atiku said.

On speculations that the president also suggested an interim government to him, Mr. Abubakar said the matter never came up.

“He did not bring it up, and I also did not”, he said. “We just spoke about politics and the security situation in the country”.