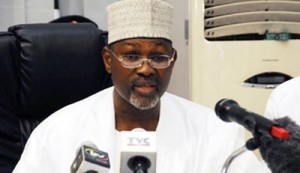 The race for presidency is stiff between President Goodluck Jonathan of the People’s Democratic Party (PDP) and Muhammadu Buhari of the All Progressives Congress (APC) but Nigerians would have known their next leader by Monday as the Independent National Electoral Commission (INEC) has assured that the results of today’s presidential and National Assembly elections would be released within 48 hours.

Speaking at a joint press conference alongside the Director General of the National Youth Service Corps (NYSC), Brigadier-General Johnson Olawumi, INEC Chairman, Professor Attahiru Jega said it would be made possible based on the improvements already made by the commission since the 2011 general elections.

“We cannot expect the results from the states under 24 hours, we will be collating the results as they are coming out but I can assure that under 48 hours, all the results should be ready. We were able to do it in 2011, we should be able to do this in 2015 based on much more improvements that have been put in place,” he said.

Jega also debunked the claim that the master key to the critical Information Technology (IT) infrastructure housing the database of INEC for card reader machine was in possession of an individual that had sympathy with the All Progressives Congress (APC) and its presidential candidate.

According to him, there is no master key for the card reader as being claimed, but a source code which was only known to the manufacturer. Jega said the code has not been breached, as far as he can tell.