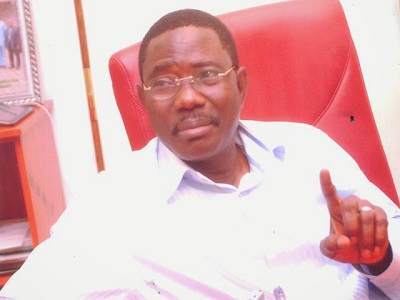 The member representing Edo North senatorial district on the platform of All Progressives Congress, Senator Domingo Obende, on Monday denied ‎reports that he had dumped the party for the Social Democratic Party.

The senator was reported to have recently led some members of the APC to defect to the SDP, in a ceremony, which held in South-Ibie kingdom, Etsako West Local Government Area of Edo State.

Obende, who described the publication as false and a “calculated attempt to smear” his reputation, ‎said the report was meaningless, as he could not contemplate leaving a party he had helped to build to an enviable height.

He said, “We cannot be talking of change at the top and I will be changing at the bottom; there is no truth in that report. Since our party primaries, I have not had any meeting with anybody nor group where such thing was discussed.

“It is mischievous and ill-conceived by those who planted such a report that I consider defamatory to my person. I have contributed immensely to the emergence of the APC; I am a member of the Board of Trustees, National Executive Committee of the party and it is definitely too late for my detractors to misinform the public about my position on our APC.

“After the primaries, I was actively involved in the primaries held in Lagos that presented our presidential candidate, Major-General Muhammadu Buhari. So, it is just too late for mischief makers to get any plus from such report”.

According to him, the APC had shown that it had the capacity to take Nigeria out of her socio-political and economic problems to the point where the country’s lost integrity would be restored.‎

He, however, urged his supporters and followers to ignore the report, adding that he remained committed to the APC.

Obende said, “I am from a royal home and I know what is shame (sic)! I remain committed to the course of our great party – the APC – to effect a positive change that we all have been craving for.

“I urge all my supporters and followers to ignore such report and they should continue to campaign and mobilise Nigerians to vote for the APC in the coming general elections”.