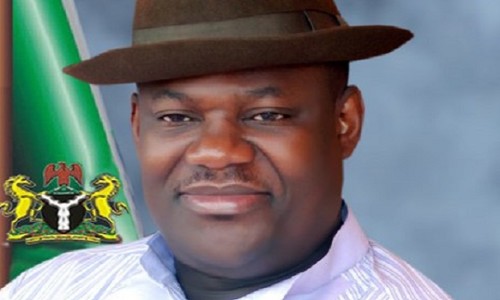 The Rivers State chapter of the All Progressives Congress, APC, has expressed joy over the exit of the state deputy governor, Engr. Tele Ikuru, from the party, describing him as a “mole” in the party.

Ikuru on Sunday announced his defection to the Peoples Democratic Party, PDP, describing the APC “as a party of rebels, insurgents and anarchists clothed in robes of pretence and deceit”.

He also canvassed support for the governorship candidate of the PDP in the state, Nyesom Wike.

Gov. Chibuike Amaechi has since expressed shock over the reasons given by his deputy for dumping the APC, which both of them joined in 2013. He, however, wished him all the best in his future endeavours.

In a statement, Chairman of the APC in Rivers State, Davies Ikanya, described Mr. Ikuru’s exit as “good riddance to bad rubbish”.

He said, “Contrary to the thinking in some quarters, the defection of Engr. Tele Ikuru did not come to us as a surprise. Rather than being shocked, we feel relieved that he is no more part of us because Ikuru was a PDP mole in our midst all these while. Unknown to most people, Ikuru initially refused to leave PDP for APC with Governor Rotimi Amaechi in November 2013.

“However, after series of meetings with his uncle and political mentor, Chief Uche Secondus, the National Vice Chairman of PDP, and some other PDP bigwigs, he was prevailed upon to follow his principal into APC.

“Engr. Ikuru was asked to stay behind to monitor the activities of APC and most importantly to act as a mole for his uncle and plot the fall of APC in the State – a mission which he failed to accomplish because APC is not just a party in Rivers State but indeed a revolutionary movement fully embraced and jealously guarded by the people of the State”.

Mr. Ikanya alleged that the calculation of the PDP and the deputy governor was that Amaechi would be impeached by hook or crook to clear the way for him (Ikuru) to take over as governor.

He said in keeping with the plot of making Mr. Ikuru the substantive governor, the PDP set in motion a machinery to use five members of the State House of Assembly to impeach the Speaker, but the move was foiled by the Majority Leader, Chidi Lloyd, and other members of the House.

The APC chairman added that the plan was that after impeaching the Speaker, Rt. Hon. Dan Amachree, the five “renegade” lawmakers led by Evan Bipi, would go ahead to impeach Mr. Amaechi and subsequently declare Mr. Ikuru as the substantive governor.

“When this plot failed, Engr. Ikuru was asked to remain in APC in the hope that the Presidency would somehow find a way to force Gov. Amaechi out of office”, Mr. Ikanya said.

“As part of this plot, the Presidency contrived a crisis with regard to the appointment of a Chief Judge for the State but failed to actualize the appointment of Justice Daisy Okocha, who was expected to facilitate the impeachment of Gov Amaechi.

“When this plot failed, PDP resorted to the mobilisation of ex-militants from Bayelsa and Rivers states to protest in the State in the hope that this would result in an insecurity crisis to be used as an excuse by the Presidency to declare a state of emergency in Rivers and impose Engr. Ikuru as Governor”.

The APC chairman further explained that when all these moves failed, the deputy governor was asked to remain in APC in the hope that the party would give him its gubernatorial ticket or a senatorial ticket.

He stressed, “When this failed, his uncle, Uche Secondus, advised him to stay on but this time to destabilize APC in his Andoni Local Government Area.

“Towards this end, Engr. Ikuru pocketed hundreds of millions of naira meant for the development of the party in Andoni and threw in the towel as he was about to be called to account for anti-party activities after asking his supporters not to attend the door to door rally held by Dr Dakuku Peterside, the APC gubernatorial candidate in February, 2015 and the women mobilisation organised by Dame Judith Amaechi the wife of the Governor of Rivers State few weeks ago”.

Mr. Ikanya said for some time now the deputy governor had stopped attending to his official duties or following the party to campaign rallies.

“We are, therefore, expectedly relieved by his exit and wish to call on our teeming supporters not to shed a tear as it will have no effect whatsoever on the fortunes of APC and its candidates in the forthcoming general elections in the State instead to thank God for removing a ‘Judas Iscariot’ in our midst”, the APC chairman said.