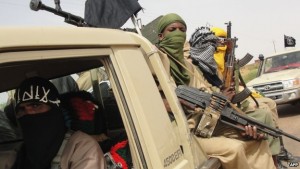 A rocket attack on a United Nations base in northern Mali has killed three people and wounded not less than 12 others. BBC reports:

A peacekeeper died when about 30 rockets struck the base in the desert town of Kidal, said the UN mission. Some rockets missed their target, killing two civilians. It is not clear who carried out the attack. Islamist militants are active in the area.

Meanwhile an al-Qaeda-linked group said it carried out an attack in the capital which killed five people on Saturday. Al-Murabitoun, an Islamist group led by Algerian militant Mokhtar Belmokhtar, said the attack on a bar in Bamako was a “revenge operation” against the “infidel West”.

A gunman opened fire at La Terrasse bar, killing a French national, a Belgian security official working for the EU and three Malians. The United Nations mission, Minusma, took over security duties from France in 2013. It regularly comes under attack from militants.

On Sunday Minusma said the rocket attack on its base in Kidal occurred at about 06:00 GMT. Peacekeepers returned fire.