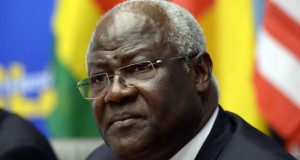 Sierra Leone’s Vice President Samuel Sam-Sumana on Saturday said he had requested asylum at the U.S. embassy in Freetown after soldiers surrounded his home following his expulsion from the ruling party this month. Reuters have more details:

Sam-Sumana was expelled from President Ernest Bai Koroma’s All People’s Congress (APC) party after an investigation accused him of creating his own rival political movement, leaving doubt over whether he could continue as vice president. “I have fled my house and am with my wife in a place I cannot disclose, waiting to hear from the U.S. ambassador, whom I have asked for asylum,” Sam-Sumana told Reuters.

A source at the U.S. embassy, who did not wish to be named, said Sam-Sumana had entered the building. It was not immediately possible to confirm that officially. Government spokesman Abdulai Bayraytay, who said he was traveling with Bai Koroma in northern Sierra Leone, declined to comment.

In late February, Sam-Sumana said that he was placing himself in a 21-day quarantine after one of his bodyguards died of Ebola amid a surge in new infections in the West African country.