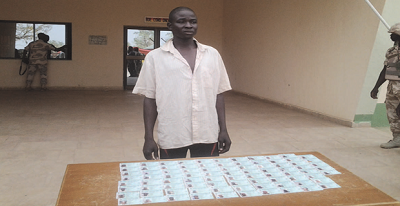 A 38-year-old man, identified as Bobbi Kotri, has been arrested by soldiers in Adamawa State for being in possession of 85 permanent voter cards.

Parading the man before journalists yesterday, army spokesman, Nuhu Jafaru, said Kotri, who was arrested at a military check point in Song LGA on Tuesday, claimed to be on an errand for a politician.

When interrogated further, the suspect said the administrator of Garta/Futu in Michika area, Jimmy Zira, gave him the PVCs to deliver to their owners who are living in the mountains and could not come down to Yola, the state capital, to claim the cards.

The soldiers later handed him over to the Adamawa State Police Command for further investigation.

Meanwhile, the spokesperson for INEC in the state, Rifkatu Duku, said the commission does not release cards to politicians for onward distribution to voters