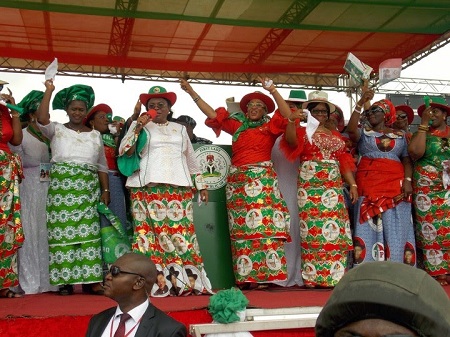 The First Lady, Patience Jonathan, has appealed to Nigerians to guard against manipulations by opposition parties during forthcoming elections.

She urged Nigerians to ensure their votes count during Saturday’s presidential polls, dismissing an earlier directive of the Inspector General of Police that voters leave polling units after casting their ballots.

Suleiman Abba, the Police IG, had warned that it would amount to people taking laws into their hands if voters stay back to protect their votes.

He assured the police will protect all votes, a pledge that has been rejected by opposition parties.

Speaking at the ruling Peoples Democratic Party, PDP, Women Presidential Campaign in Enugu on Monday, Mrs. Jonathan said guarding the votes will eliminate all forms of rigging and make the elections credible.

The first lady urged the electorate to vote massively for President Goodluck Jonathan for the continuation of his transformation agenda.

“After voting on March 28, make sure you follow your votes till the end. Do not leave the arena until the counting ends. Vote wisely, you must vote according to your conscience”, the first lady warned.

“The Peoples Democratic Party (PDP) is a peaceful party. You cannot change what God has ordained.

“Jonathan’s government has encouraged exportation of food produce and eliminated corruption in the distribution of fertilizers.

“Nigeria is the largest in cassava production and PDP will make it to remain so. Jonathan has equipped our health care facilities and he has promised to do more”, she said.

Governor Sullivan Chime of Enugu State promised that the state will score highest in the votes for President Jonathan.

Mr. Chime, represented by his deputy, Ralph Nwoye, said the party had delivered dividends of democracy to citizens of the state.

The Deputy President of Senate, Chief Ike Ekweremadu, commended the first lady for campaigning for the party in the states.

“We thank you for going round to campaign for the PDP as a whole and not only for the president”, he said.

The National Woman Leader of the PDP, Amb. Kema Chikwe, urged the women of the state to come out en masse and vote for President Goodluck Jonathan.

“Jonathan has given us and now is the time for us to give him back. He gave us the opportunity for our voices to be heard”, she said.

Others who spoke at the rally included the gubernatorial candidate in the state, Mr Ifeanyi Ugwuanyi and his Deputy, Mrs Cecilia Ezeilo, the Minister of Power, Prof Chinedu Nebo and the Special Adviser to President Jonathan on NEPAD, Amb Fidelia Njeze.

The News Agency of Nigeria (NAN) reports that the event was attended by National Assembly members from the state, executive council members, and women groups from the state. (NAN)