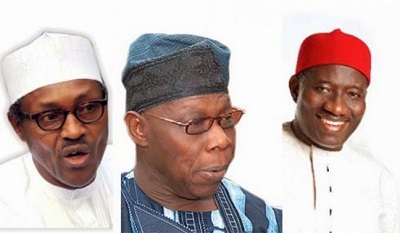 Niger-Delta Ex-militant leaders have warned former President Olusegun Obasanjo and the presidential candidate of the All Progressives Congress (APC), Muhammadu Buhari, to stop instigating Nigerians against President Goodluck Jonathan’s administration. The former warlords stated that the continued ridiculing of the president in the eyes of Nigerians could cause disunity along ethnic and religious divides.

Speaking under the aegis of the Leadership, Peace and Cultural Development Initiatives (LPCDI) on Sunday, the ex-militant figures argued that Nigeria’s security and peace was being threatened by the hate campaigns by various political parties ahead of the presidential polls, adding that the frequent media attacks on President Jonathan’s government especially by Mr. Obasanjo was further heating up the polity.

In a statement after the group’s meeting, its leader, Reuben Wilson, popularly known as General Pastor Reuben, cautioned former President Obasanjo to think carefully before issuing divisive statements against President Jonathan, who hails from the Niger-Delta.

“We are advising Obasanjo to think very well before he takes any further action. It should be known that Nigerians are watching him closely and monitoring his utterances and actions against President Goodluck Jonathan”, the group said.

They continued: “Nigerians are aware that because President Goodluck Jonathan refused to dance to his tunes as a perceived stooge, Obasanjo’s attacks [have] become a dangerous and threatening comic relief to the unity of the country. Obasanjo should stop instigating Nigerians against Jonathan through his utterances. Rather he should be grateful to Goodluck Jonathan completing all his abandoned projects, like the East-West Road”.

According to the group, Mr. Obasanjo should give credit to Mr. Jonathan for completing most of the projects awarded by the former president. “This should be the gesture from a political father to his son. Why can’t he assist his son Goodluck Jonathan to take Nigeria to the next level? Why is Obasanjo pulling down Jonathan’s administration to cause disunity in the country? We advise him to have a rethink before it is too late”.

The ex-militants also warned the APC flag bearer against the use of religion and ethnicity in the ongoing political campaigns.

“We call on the APC and General Buhari to have a rethink over the use of religion and ethnicity to campaign against Jonathan’s re-election”, the group said. They added: “Why is the APC using the fact that Jonathan is from a smaller geographical area to oppress him? Why can’t they argue based on what Jonathan has done and what he has not?”