Almost six months after a guest house collapsed within the Synagogue Church of All Nations, SCOAN, situated in Ikotun area of Lagos, a renowned structural engineer has uncovered what might have caused the tragic incident that resulted in the death of over 116 people.

According to engineer Saheed Ariyori, who is a consultant to the Lagos State Material Testing Agency, the building collapse was as a result of faulty foundation.

P.M NEWS reports that Ariyori made the claim today, Wednesday, March 4, 2015, while testifying before the coroner’s inquest investigating the collapse of the building. 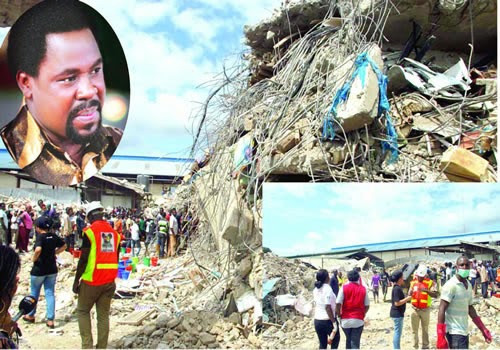 It would be recalled that the unfortunate incident which happened on September 12, 2014 has generated a lot of controversies.

While speaking at the inquest, Ayiroyi, who was led by Mr Akingbolahan Adeniran, counsel to the Lagos State Government, stated that he was part of the team of structural and geo-technical engineers that carried out a Structural Integrity Test on the building after it collapsed.

The engineer informed that the team took samples of materials used in the building to the laboratory for test and also took measurements of the foundation bases.

According to him, since the church did not furnish them with the building designs, the team had to simulate the building to arrive at their conclusions.

Ariyori said: “Based on all the tests and the calculations, we discovered that from inception, the building failed because the base that was supposed to take the load was grossly inadequate.

“It was a wrong choice of foundation base. The foundation should have been continuous base and not a pad as was used in the construction.”

Responding to the claim, SCOAN’s counsel, Mr Olalekan Ojo, asked the court to adjourn his cross-examination of the witness to enable him consult with the church’s engineers.

Ojo noted there were some discrepancies in the building design which needed to be examined before the witness could be cross-examined.

He said the church’s consultant engineer, Mr Oladele Ogundeji, while testifying before the court had also disagreed with Ayiroyi’s claim that a raft foundation should have been erected for the structure.

It was gathered that the inquest was adjourned till March 5 for site visitation by parties while Ariyori’s cross-examination was fixed for March 6.

This latest development is against a recent testimony of the contractor who built the collapsed Synagogue Church, Mr. Akingbola Fatiregun,who said that the affected building was constructed following best practices.

Fatiregun also added that though the foundation of the building was meant for a six-storey building, it was constructed in a way it could have conveniently supported four additional floors.

He also assured his company had carried out projects not only in Nigeria but in Ghana, Niger Republic and the United States for the last 11 years.

Only twenty four hours ago, a Lagos State High Court sitting in Ikeja adjourned till March 6 for ruling on an application filed by the founder of SCOAN, Prophet Temitope Joshua against the coroner’s inquest investigating the collapsed of a building within his  church’s compound.

It was reported that Justice Lateefa Okunnu had noted that the issue whether the coroner was a “juristic person” (can be sued or can sue) must be determined before the court delivers its ruling.