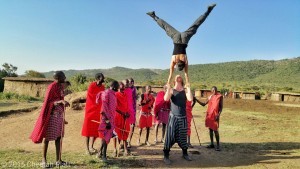 Many starry-eyed marriage proposals promise the world. 30-Year-Old Cheetah Platt and Rhian Woodyard, 32, are actually following through on that promise, but they are taking it to the level. The Huffington Post covers the event:

Instead of spending their money on an elaborate wedding ceremony, the Los Angeles couple decided they’d rather start their lives together by traveling the world, holding 38 wedding ceremonies along the way. For less than $3,000 apiece, the two — both acrobats — planned out an impressive itinerary spanning 83 days and 11 countries.

“We live in California, which is a very expensive state,” Platt told The Huffington Post, explaining how they transitioned from the idea of a traditional ceremony to what they’ve come to call a “worldwide wedding.” “And weddings? Oh they’re a lot of money. We didn’t want to spend a lot of money for a single day.”

The two anguished over the particulars of a wedding, then realized after “a lot, a lot of planning and preparation” that they could both get ordained online and marry themselves for free all over the world instead. “Not only is this possible,” said Platt, “but oddly enough — it’s more affordable.”

“I really want people to know that this wedding, three months around the world with unbelievable adventures… is cheaper than throwing a good — not even a ‘great,’ not even an ‘epic’ — just a good wedding in California for one day.”