Home Metro News Those attacking me over card readers are scared of free and fair...
Facebook
Twitter
WhatsApp 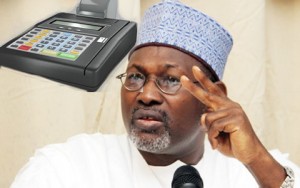 Chairman of the Independent Electoral Commission (INEC), Professor Attahiru Jega, Wednesday, said he remained unfazed by attacks on his integrity and person over the deployment of card readers for elections. According to him, only those who had plans to manipulate the outcome of the elections have been complaining and fighting against the use of the technology.

“[…] they have been attacking me because they know that the card reader machines will help us to address all those irregularities, starting from the accreditation of voters at all the polling units. How can they manipulate the election when all the information with regards to the number of voters that turned out at every polling unit is automatically captured and transmitted by the card reader machines?” Jega asked, while unveiling the Nigeria Civil Society Situation Room in Abuja yesterday.

“We have made rigging impossible for them as there is no how the total number of votes cast at the polling unit could exceed the number of accredited persons. Such discrepancy in figures will be immediately spotted. This technology will further make it impossible for any corrupt electoral officer to connive with any politician to pad-up results,” he added.

“The crooked ways they used in the past to get away with manipulation of election results have been dealt with. This time, with the card readers, such fraud will be easy to establish.

“We have further made arrangement that all the results coming to local government collection centers will be scanned, transformed to PDF format and uploaded on our website so that anybody can go there and confirm result from his polling unit.

“We believe that this is an added value to our process, it is something that we have not been able to do in the past.”

Jega also assured that INEC had perfected all its strategies to ensure a hitch free poll.

“Let me use this opportunity to reassure Nigerians that we believe that we have done everything possible to ensure that the 2015 general election is successful. We are adequately prepared in terms of both logistics and manpower. Likewise, all the security agencies, especially the police which have a lead role to play in terms of providing security during elections, have assured us that they are ready,” he said.

“Beginning from today, we are commencing the rolling out of non-sensitive materials. Likewise, from Friday, all the sensitive materials will be retrieved from the vault of the Central Bank Nigeria by our officers, accompanied by security operatives and representatives of the political parties.”

He said that the materials would be distributed to states from where it would be taken to local government areas and subsequently to the ward level.

However, the INEC boss said it was regrettable that the results of the election will not be electronically transmitted to the collation points. Although INEC initially piloted the procedure at two previous elections in Cross River and Niger States, “we decided that we will not put the electronic transmission of results to use in 2015 in view of the controversies the procedure might likely generate from those who don’t see anything good in what we are doing as a commission.

“We can see the dust that the introduction of card readers raised. So we decided to keep piloting and improving on the system beyond 2015, hopefully, by 2019, the commission will introduce it for the general election”.