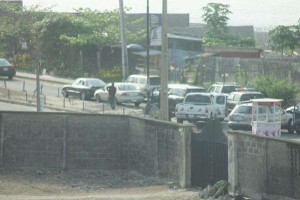 Three policemen and a teenager were killed yesterday in Lekki area of Lagos State when armed robbers stormed two new generation banks in the area.

The robbers, numbering five and dressed in military camouflage, were reported to have gotten to the place through the creeks. Vanguards reported that they scaled a fence bordering a shopping complex before gaining entry into the two banks located at the roundabout, on the Lekki end of the Lekki-Ikoyi Bridge at 4.30pm.

Sporadic gunshots announced their arrivals as some motorists stuck in traffic left their vehicles to run for their dear lives.

While three of them were said to have gone into the banking hall, where they ordered everyone to lie down, the remaining positioned themselves outside.

The robbery was successful, according to eyewitnesses, who said that the bandits continued shooting until they made their way back to the creeks from where they escaped in their operational boat. They were said to have carted away an unknown amount of money.

“Those killed included a 15-year-old girl, who sold fish opposite the bank. She was hit by a stray bullet. Another man, also killed, was said to be a policeman in mufti,” Vanguard quoted an eyewitness, Femi Olatunji, to have said.

“The other two policemen were escorts to expatriates of an oil company. The expatriates were seated in a white coaster bus, while the policemen occupied the back seat.

“They did not collect the expatriate’s briefcases after killing the policemen. They left with boxes of money, before other policemen arrived.”