Home Metro News Tinubu And His Cabal Are Overpushing Buhari; Allow Him Attend To His...
Facebook
Twitter
WhatsApp 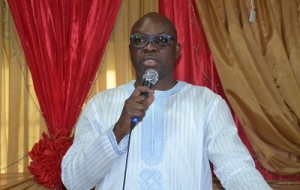 Ekiti State Governor, Ayodele Fayose has urged Nigerians to appeal to the former governor of Lagos State, Bola Tinubu and his cabal to allow the All Progressive Congress(APC) presidential candidate, Muhammadu Buhari, to attend properly to his health. He said they were pushing the former head of state too much because of their selfish interests.

“since last week Thursday, that Buhari appeared for less than two hours at the Chatham House where he said his doctors certified him fit and that he was returning to Nigeria for the ‘final onslaught on the PDP,’ he has simply disappeared from public glare.” a statement signed by Fayose’s Special Assistant on Public Communications and New Media, Lere Olayinka, said in Ado Ekiti on Sunday.

“Isn’t it strange that someone who is contesting an election in 28 days time could afford to stay outside the country for going to two weeks?

“Buhari confessed that he actually saw his doctors, why did the APC cabal lie that he never visited any hospital, even going to the ridiculous and criminal level of using pictures taken in Abuja to authenticate claim that Buhari had a television interview in London?

“Like I have maintained, the same cabal that were involved in the Yar’Adua saga are also involved the packaging of Buhari and Nigerians must save the man from these people, who are only interested in using him to assume power.”

He dismissed insinuations that Buhari was a candidate of the north, saying if that was so, Malam Nasir El-Rufai would not be the only notherner among those who attended the last Thursday’s Chatham House event.

“In appreciation of Tinubu’s role, Buhari gave him (Tinubu) the sole right to choose his running mate, with Tinubu still being rumoured to be interested in the Vice President position that he gave his surrogate, Prof Yemi Osinbajo.

“Also, the APC confirmed yesterday that Buhari’s campaign is being funded by Tinubu and Amaechi.

“All these point to the fact that Tinubu and his cabal have a sinister agenda against the North, which they want to use Buhari to achieve.

“Our leaders in the north should therefore intervene and free Buhari from the APC cabal now because he needs to take proper and adequate care of himself medically,” Fayose insisted.